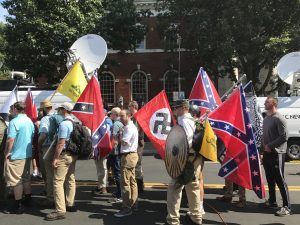 ake of the events in Charlottesville, Virginia, numerous instances have cropped up of “doxxing,” where individuals alleged to be white supremacists were publicly outed and shamed on social media for their participation in the event. Ultimately, many of these people ended up losing their jobs due to their suspected affiliation with white nationalists. As this is all unfolding, the question has arisen: can someone be fired for espousing a traditionally racist ideology? In other words, can an individual, while he is off-duty, wave a flag with a swastika and claim it as a protected political belief?

The answer, as always – it depends.

For private sector employees, who make up approximately 85% of the workforce, the First Amendment generally does not protect you from termination for something you’ve said either in the workplace, outside of the workplace, or online. This is because the First Amendment applies to government action to curtail free speech, not private sector employers. On the other hand, anyone employed by a local, state, or federal agency is generally protected by the First Amendment as long as the employee’s actions or speech don’t disrupt the workplace. Federal law prohibits discrimination on the basis of race, gender, religion, color, and nationality, but not on the basis of political affiliation.

Several states have enacted protections for employees’ political activity. The broadest laws belong to New York and California, which prohibit discrimination on the basis of an employee’s political activity or beliefs in or outside of the workplace, as long as those beliefs or activity don’t interfere with the functioning of the business.  Other states with protections, although not as broad, include North Dakota, Colorado, and the District of Columbia.

The other categories of workers with added protections are union workers and those with contracts that clearly delineate termination “for cause.”

Although laws vary by state, and each case is distinct, the bottom line is this: businesses have a right to to protect their public image. If an employer believes that your activity reflects poorly on their business, expect that your social media posts or attendance at events outside the workplace could have consequences for your continued employment.